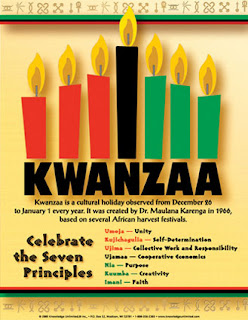 Instead of Christmas (much to my family's chagrin) I have chosen to celebrate Kwanzaa this year. From December 26, 2010 to January 1, 2011 I shall be celebrating a Pan-African holiday aimed at strengthening and unifying the African Diaspora. Centered on Community and African unity.
As a Jamaican living in Japan I find it pertinent that I maintain a connection not only with my fellow Jamaicans over here but also with my fellow African Diasporans as well. In a predominantly xenophobic country such as Japan it is a daily struggle to keep oneself grounded.
I feel that by celebrating Kwanzaa I will be able to embark on the new year refreshed and renewed and confident in my abilities as a black female attempting to survive in Asia.
Kwanzaa is a Pan-African holiday which celebrates family, community and culture. Celebrated from 26 December thru 1 January, its origins are in the first harvest celebrations of Africa from which it takes its name. The name Kwanzaa is derived from the phrase "matunda ya kwanza" which means "first fruits" in Swahili, a Pan-African language which is the most widely spoken African language. It was created by Dr. Maulana Kurenga.

Colours: Red, Green and Black. Black for the people, red for their struggle, and green for the future and hope that comes from their struggle. It is based on the colors given by the Hon. Marcus Garvey as national colors for African people throughout the world.

Greetings: 'Habari gani?' ( 'What's the news' or 'How are things' in Swahili) Is to be said at the beginning of each days celebration to which the answer will be the principle for that day.

The Seven Principles (Nguzo Saba) of Kwanzaa are:

Day 2. Kujichagulia (koo-jee-chah-goo-LEE-ah): Self-
Determination
To be responsible for ourselves. To create your own destiny.

Day 4. Ujamaa (oo-jah-MAH): Collective economics
To build, maintain, and support our own stores, establishments, and businesses.

To restore Pan-African people to their traditional greatness. To be responsible to Those Who Came Before (our ancestors) and to Those Who Will Follow (our descendants).

Day 6. Kuumba (koo-OOM-bah): Creativity
Using creativity and imagination to make your communities better than what you inherited.

Day 7. Imani (ee-MAH-nee): Faith
Believing in our people, our families, our educators, our leaders, and the righteousness of the Pan-African struggle.
It is my hope that by focusing more on my own individual growth and improvement as I enter a new year that my purpose on this earth will be better realized.
Kwanzaa yenu iwe na heri! [Happy Kwanzaa]
iNi [Nina]
Nadya Dee
Penned by Nadya Dee on Sunday, December 05, 2010