Love is like having to walk the plank blindfolded, without wings
It's like trying to escape quick sand while sinking deeper and deeper
Or simply trying to stand, but you keep falling down
Love is like drowning, losing air, like breathing underwater...

Better yet, how about this?

The Story of Lilith

For those who have never heard the name before you may be wondering... Who is this Lilith?
In my own words....
Lilith (as a myth) was apparently Adam's first wife, yeh, Eve was a matey lol, but Lilith did done sight the rake...and she decide seh she nah guh jus drop pickney like puppy no siree Adam. So she cut...yup...just like that... and is not until Adam finally realise seh shi not coming back that them bruk out piece a him ribs an turn it into Eve. But that's not where the drama begins, no sah.

They couldn't allow for there to be any recollection of a defiant woman in the Bible because that would contradict the patriarchy they were constructing and so...

Women like Ruth only got a few pages in the Bible because I guess women didn't have the capacity to read and write right? bull shit! And poor Delilah was portrayed as a ruthless bitch, when she was just trying to protect her own, with the mere exception of Deborah the great judge and prophetess who didn't even get a book of her own

Ooh and then the whole foolishness about women having to keep pure for their husbands....like pieces of meat to be bought, slaughtered and devoured.

How was this allowed you may ask? because Lilith was erased as a symbol of strength and forced to dwell in myths of darkness and evil. 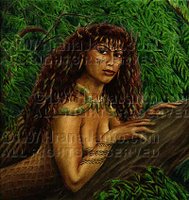 So after them banish poor Lilith [who was simply exercising her human rights] to the recesses of hell they converted her to an evil mythological figure. But in truth the Hebrew derivative of Lilith can be translated as dark. Look at that eeh... Lilith, the deep evil creature that sucked men's blood and stole yound children in their sleep, was nothing more than a BLACK WOMAN!!! a DARK skinned woman! (This is my interpretation btw see pic for better understanding <<<) What a breakthrough, it's the whole problem of the double minority all over again. Strike one for being a woman, strike two for being black, strike three for being both! Poor poor Lilith!!! The Genisis of Racism!

I think it's about time that we as women reclaimed our thrones as protectors of the Earth. Does anyone remeber Gaia? (That's another blog for another day though I'm still in the process of seeking out the info) just take a good look @ the photo though..Gaia was a black woman, and she was Mother Earth!

So in my quest to gain a better understanding of the historical relevance of my current situation, I found Lilith and Gaia and I've dusted them off and I take them on my journey as a symbol of my strength as I endeavor to discover the truth. I will continue to conduct my own research until I am satisfied and content with the world.


I fight the patriarchy because it has had a monopoly over the choices and progression of women for way too long. Viva Lilith & Gaia!!!


Nota Bene: I really do love men..there is absolutely no doubt about it...
I love their strength, and their abilities, their sweet caresses...not to mention that tool in between their legs! Who could not love that? lol...

I'm just saying though..A ooman time now! and i need a man that can understand and respect that... So far, i've found none....
Penned by Nadya Dee on Wednesday, October 04, 2006