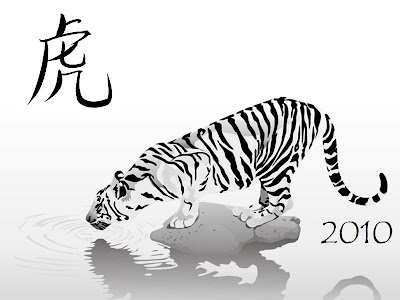 With 2009 almost at its end and 2010 fast approaching I decided to do this mini-post on the Chinese Calendar.
Since living in Asia for the past few years I've developed an interest in the culture, customs and belief systems of Japan and by extension China. I spent a few weeks in Summer doing an intensive course in Japanese with focus on Kanji which included Calligraphy and writing Haiku. This really ignited my interest in the origins of Kanji and furthered my desire to learn more about Chinese culture.
Also, I've recently started individual research on the Zodiac, the Cosmos etc and this is right along those lines. That being said I thought I'd share with my readers what I've learnt about the Chinese Calendar and it's significance.

Chinese New Year starts with the New Moon on the first day of the new year and ends on the full moon 15 days later. The 15th day of the new year is called the Lantern Festival, which is celebrated at night with lantern displays and children carrying lanterns in a parade. The Chinese calendar is based on a combination of lunar and solar movements. The lunar cycle is about 29.5 days. In order to "catch up" with the solar calendar the Chinese insert an extra month once every few years (seven years out of a 19-yearcycle). This is the same as adding an extra day on leap year. This is why, according to the solar calendar, the Chinese New Year falls on a different date each year. New Year's Eve and New Year's Day are celebrated as a family affair, a time of reunion and thanksgiving. The celebration was traditionally highlighted with a religious ceremony given in honor of Heaven and Earth, the gods of the household and the family ancestors. The sacrifice to the ancestors, the most vital of all the rituals, united the living members with those who had passed away. Departed relatives are remembered with great respect because they were responsible for laying the foundations for the fortune and glory of the family.

The Chinese calendar is made up of a cycle of twelve years, each of them named after an animal. According to Chinese astrology, every person is born in a year represented by an animal and his behavior and traits are tremendously influenced by the animal sign ruling the year.

The year of the Ox forecast:

We will feel the yoke of responsibility coming down on us this year. No success can be achieved without conscientious efforts.
his year will no doubt bear fruit, but the motto is: "No work, no pay!" Time waits for no man; if we are too lazy to sow then we can blame no one if we have nothing to reap. We will find a great many things requiring our attention, and the list of what needs to be done will seem endless. The Spartan influence of the Ox will be a constantly cracking whip over our heads. Better to apply oneself diligently than waste time arguing with the authorities. They will prevail, as the year of the Ox favors discipline.

Most conflicts this year will arise more from a lack of communication and refusal to give in on small technicalities than anything else. But hang on and be patient. Everything will be sorted out and we will be rewarded for our efforts--so long as we remember to do things the conventional way. This is no time for tricky shortcuts.

This is definitely an explosive year. It usually begins with a bang and ends with a whimper. A year earmarked for war, disagreement and disasters of all kinds. But it will also be a big, bold year. Nothing will be done on a small, timid scale. Everything, good and bad, can and will be carried to extremes. Fortunes can be made and lost. If you take a chance, gamble for high stakes, but understand that the odds are stacked against you.

People will do drastic and dramatic things on the spur of the moment. It is not surprising that Watergate and the drama of Nixon's resignation culminated in the hotheaded year of the Tiger. Tempers will flare all around and it will be a trying time for diplomacy. Like the Tiger, we will tend to charge without thinking and end up regretting our rashness.

Friendships, joint ventures and deals requiring mutual trust and cooperation made at this time are brittle and will be easily broken. However, the forceful and vigorous Tiger year can also be used to inject new life and vitality into lost causes, sinking ventures and drab or failing industries. It will likewise be a time for massive change, for the introduction of new and bold, especially highly controversial, ideas.

The fiery heat of the Tiger's year will no doubt touch everyone's life. In spite of its negative aspects, we must realize that it could have a cleansing effect. Just as intense heat is necessary to extract precious metals from their ores, so the Tiger year can bring out the best in us.

Scary right? I always say hindsight is better that 20/20 vision. So having some idea of what the future will bring ought to help us all to better prepare for the catastrophes which may come.
I suppose that's why I am so drawn to horoscopes and fortune telling. I like being prepared. I hate surprises unless it's in the form of a huge gem or a lottery ticket. And even then...if you're ill-prepared, even good surprises can end in disaster.
All-in-all, I'd just like to take this moment to wish my readers a Happy Holidays since in just a few days I'll be on my South-East Asian adventure. May the New Year (2010 and Year of the Tiger) bring you prosperity and good fortune.
iNi
plan to do some big things next year! Stay Tuned!
NadYa Dee
Penned by Nadya Dee on Monday, December 21, 2009