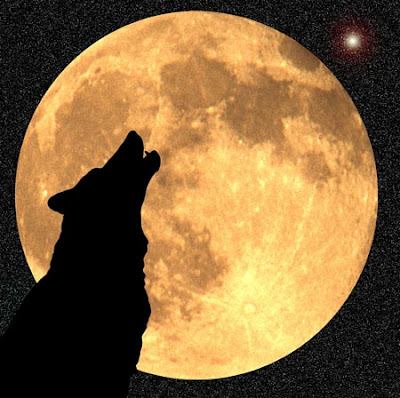 As I sat and watched two little girls playing on the train today, I began thinking about this blog that I had planned to write a few weeks ago: 'Were Friends'.
Watching them carefree, giggling at a sleeping baachan (old lady) and tossing a stuffed whale around made me think of my own childhood and the friendships that now seem like only a distant memory.
Birthday parties, sleepovers, secret clubs & crews, all these things are so far removed from our current state. In actuality most of my close childhood friends are mere acquaintances now (thanks to FB) and some are even complete strangers.
Which leads me back to the title of this blog.
I'm sure you all have heard of a were wolf.
[For those who haven't: a were wolf is a human who possesses the ability to transform into a wolf (mostly during a Full Moon) while retaining human intelligence.]
However this post is not about the Moon's ability to change some one (actually in some strange way it probably is) it's really about 'were friends' i.e. people who possess the ability to transform into friends and vice versa. But it also has a double meaning for people who actually 'were' friends i.e. used to be friends but are no longer.
Lately I've been thinking quite a bit about friendship. What does it mean to be a friend? Why do people become friends? How long are friendships meant to last? Is there a friendship expiry date?
Personally, I've had many friends. I've actually never really had problems making friends and even if I didn't have friends around I could always find ways of keeping myself entertained (being an only child).
For that reason I never really made a big deal about having friends. If I liked someone (i.e. their presence didn't annoy me) then we'd be friends until they began annoying me or I lost interest, whichever came first.
Then again, as a child you don't really get to choose your friends do you. Who your friends are essentially depends on which school/ nursery/ extracurricular activity your parents enrolled you in and moreso which "stereotype" you fit in with once placed in such institutions.
I've always considered myself a free spirit. From nursery straight up to University I never let people get to me. Which in turn meant I didn't often let people get too close to me.
Yet, I've had so-called "best friends" which, now that I think about it was based more on proximity and circumstance than it was on true affections.
In any case throughtout my 24 years on this earth I have met people who I've liked, befriended and subsequently unfriended.
This post is about those people. People who you share a common interest with, whether it be life goals, beliefs or educational paths. These people who you end up spending increasingly more time around, conversing with, sharing thoughts, developing ideas. These people who infiltrate your inner circle, people you go on trips with, people you eventually begin to refer to as your family, because that's how close they've become.
But eventually there comes a time when you realise that somewhere along the line your life goals, common interests, ideas and thoughts have changed. They defer so greatly that you can hardly find anything of common interest to talk about. You are no longer on the same path in your lives. This is when an important and, at times, painful decision has to be made.
You can either a) ignore the problem hoping it will go away or resolve itself or b) confront it head on and ask that one question that simply requires a yes or a no: Are we friends?
I have done both. And both resulted in "were friends".
Now, I understand that if two people truly want to be friends then both parties need to be willing to work together to ensure that even with diverging paths, the friendship will survive.
If one party has already thrown in the towel or is less invested in the friendship than the other, then what is the point of perpetuating such a parasitic relationship?
Alas there is none.
As I sit here and reflect on past friendships as well as friendships that have passed the tests of both distance and time, I heave a sigh of relief. Because as painful as it was to let those old frienships go, I feel lighter and freer now to fulfil my own destiny without having to worry about friends who were but are not any more.
Rejoice and be grateful for the friends that you have and cut off any who are only holding you back from achieving your true potential.
iNi
know my friends different from my enemies.
NadYaDee
Penned by Nadya Dee on Saturday, July 25, 2009