So, as of late I've been going to the gym. First I do half an hour on the running machine then it's off to weight training. I love weight training and I missed it when I wasn't doing it. There's just something so invigorating about pulling your own weight...or even a fraction of it.
But this post is not about my experience at the gym but moreso my observations.
There's this guy who comes to the gym at least once a week. He wears a pull over, a polo shirt, slack jeans and some white tennis looking shoes. His large stomach exceeds the confines of his pants. He wears square glasses and has thining grey hair with a few bald patches. Each time he comes to the gym he has his red bag, containing his portable TV the adaptor and his headphones. He then positions himself on one of the machines and proceeds to walk for 50 minutes while watching TV.
I find this hilarious to watch, but what was even more hilarious was this Monday. All four machines were occupied. When he comes into the training room a look of obvious perplexity covers his face. He then paces the room, looking inquisitively at each machine. Finally, his eyes settle on the sit-up contraption. He clumsily positions himself on it, his face turning red as his head hangs precariously off the end. He struggles to sit up and barely completes one full motion before he quits, dismounting the machine, panting and sweating furiously.
He glances back over to the machines. One person seems to be slowing down, so he scampers for his TV bag, which he had carefully placed in the corner, and collects cloth to wipe down the machine. Once the person leaves, he quickly assembles his apparatus to claim his space. Then he wipes every crevice of the machine with the cloth.
I stare on in amazement. Clearly he has been given an ultimatum by either his wife, his kids, his doctor or all of the above to improve on his health and fitness (indicated by the excess fat hanging from his gut). However he has decided that this would not interfere with his daily news or whatever else he's watching. So he comes to the gym and walks while watching TV. 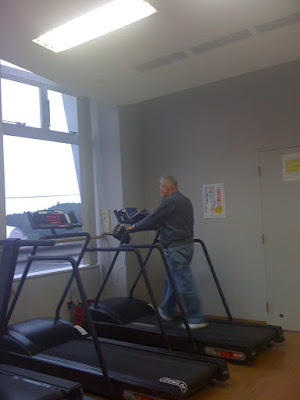 Oh the Japanese never cease to amaze me.
iNi
just needed to share that with y'all
NadYa Dee
Penned by Nadya Dee on Tuesday, March 10, 2009