It's a conspiracy I tell you! 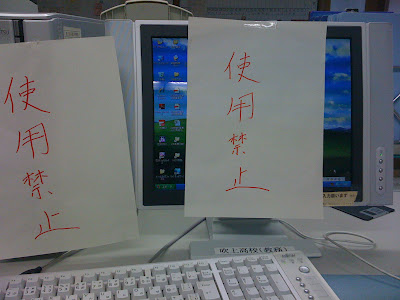 The teacher's at both my schools are conspiring to keep me off the internet, I swear!
Now at my technical high school, there's a "communal" computer that I normally use to look for information on the internet. Since for some reason unknown to me, I am incapable of accessing the internet on my Laptop. This is after them having fed a LAN cord to my desk. But when I plugs it in...it doesn't connect to the net for some god-forsaken reason. So... I just don't bother with it anymore.
So whenever I wanna go on the net I use the school's PC. I tend to spend a lot of time on the internet merely due to the fact that there's NOTHING ELSE FOR ME TO DO!
But there's this old dude there that's in charge of making the schedules or something and whenever he wants to use the puter he comes to me and says (in badly pronounced English) "Excuse me Miss Nadya but I have to work now." Like what the hell do you think I'm doing here buddy? catching fish?
Anyhoo, lately it's been getting worse and Monday I even heard the Vice-Principal say to him (in Japanese) "Tell her your busy". Like WTF could be so important it can't wait 5 minutes for me to Log Off and X out of my windows? Sheesh...
Anyhoo, Since I got my iPhone I rarely use their stupid PC since I've got Facebook, Gmail AND Twitter in the palm of my hands. The only reason I use the school PC is to do ACTUAL work, imagine that shit!
Nevertheless, this Thursday I go into school and there's a paper with red writing covering the computer. Would you like to guess what was written there? DO NOT USE  (in Kanji).
Then the English teacher says to me "Nadya, I need to talk to you about your computer". So here I'm thinking, "These MFers are gunna blame me for breaking the f-ing computer! Aaaaw Heellll naaaaaaw!!!" "It wasn't me!!!!"
Well luckily that wasn't it, but what I did find out was that apparently there was some evil computer virus named REVO attacking all the computers in the office and that I should check my PC for it just incase.
So I try to explain to them that I don't connect my PC to the school's network and that I haven't used my USB at school since last year so it couldn't possibly be me. Well of course they were incapable of comprehending and ended up "scanning" my PC anyway. (which  literally meant looking through My Documents). They must have thought the virus was like Influenza like a computer sneezed and now all the computers may have it...idjits!
But here's the twist guys, after the whole computer virus scare...would you believe that the same stinking man was back on the computer by midday, going about his work, acting as if there was no virus? What? All of a sudden the virus is gone? Aaaaaw sshhheeeeeiiiitttt!!!
I mean obviously this was just some elaborate scheme to get me to not use the computer...these people are something else bwoiiii....
But then the icing on the cake came today at my other school when I went to check some information on the only computer that connects to the internet and in the space of 15 minutes both English teachers approached me to ask me what I was doing then advised me that we're not allowed to use the PC for personal reasons. So then tell me this smartass why is it called a PERSONAL Computer? huh? huh? huh? Explain that one to me! Fewl. Alright internet police!
Aaaaah bwoi...From last year the badmind was active when they took away the wireless and then password protected it...but now this shit is getting out of hand! Like WTF!!!
Thank GOD for my iPhone. 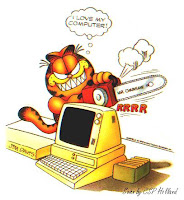 Well that was my week of badmind.
P.S. One of my Vice Principals stepped on my foot today and it really hurt. Should I sue him for punitive damages?
InI
jus want to use a likkle internet in peace...
Nadya Dee
Penned by Nadya Dee on Friday, February 06, 2009