When it comes to the realm of "love-making", "knockin boots" , "sexing", "screwing", "humping", "bumping and grinding", Mr. Robert Kelly is in a category all by himself.
Hence why I've chosen to address this album here, separately. For me, 12 Play signifies my sexual realization. Whenever I listen to this album I can't help but think of having sex. This album personifies sex.
The story of my introduction to Mr. Kelly and the 12 Play is a funny one. I remember the exact year because it was the year I graduated from Prep School, 1996.
Around this time Celine Dion's album Fallin into You was a huge hit, and as an 11 year old female, I knew the hit songs by heart and desperately wanted the album (this was way before the days of Napster, Itunes and Limewire). So when my mother asked me what I wanted for my graduation present I told her "Celine Dion - Falling into you". But ofcourse poor Ruthy knew nothing about Celine Dion at the time nor about this album. So I decided to describe it to her. All I could remember was that it was white. Which is what I suppose I told her, the details are a tad bit foggy, 12 years later. 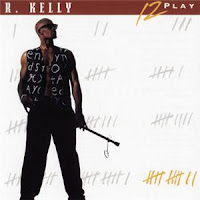 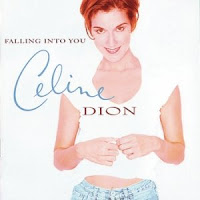 Well you've all heard about chinese telephone I'm sure...well something similar took place on that fateful day that Ruthy decided to visit the Record Shop.
Now before I go on, I do not blame poor unaware Ruthy for what possibly transpired in the store. I truly believe that it was the clerk who assisted her on that day who is to be held responsible for the following incident.
It probably went something like this:
Ruthy: "Excuse me sir, I'm looking for a CD for my 11 year old daughter, she graduating from Prep School next week and she ask mi for this album by.... well I don't really remember the name of the singer but she told me that the album had a white cover. I don't know much about albums so maybe you could help me find it, you should know what kind of music these young children listen to nowadays. How old are you by the way? you look young."
Store Clerk: "Yes ma'am. Of course. Right this way."
They search for a while until he is tired and frustrated with the one bag of chatting (Ruthy tends to speak alot, like mother like daughter I suppose) and bucks up on the R.Kelly album with it's white cover and convinces unknowing Ruthy that this is what the kids are listening to nowadays. [Sure, all 11 year old's just love to Bump and Grind. smh.] She purchases the CD and the rest as they say...is history.
Now I can't help but think that it was divine intervention that caused that eedyat clerk to con my mother into buying that album, and if I knew who he was, I would give him a big chups right now because that album changed my life exponentially.
It wasn't until I was "of-age" that I realised the true power of the 12 Play and what exactly Robert was talking about, but once my eyes were opened, I began to see my sexuality in a new light.
This album is much more than just a series of erotic songs, it is the lyrical blueprint of my sexual journey. It has made me into the sex fiend that I am today.
And although Robert has done some questionable things in his lifetime. I have no doubt that when he wrote 12 Play, he wrote it with me in mind. (but wait a minute wasn't I roun 11 at the time?)
Alas, If you ever need some bump and grind music, this is the album to get!
Check out the following tracks, a few of my faves:
Your Body's Calling
Bum and Grind
Seems like your ready
Sex Me Pt. 1-2
12 Play
12 Play
Until Next time: (8) I'm just a bachelor, looking for a partner, someone who knows how to ride, without even falling off (8)
This one gets you a stick of Wrigley's.
InI
Nadya Dee
Penned by Nadya Dee on Monday, December 15, 2008